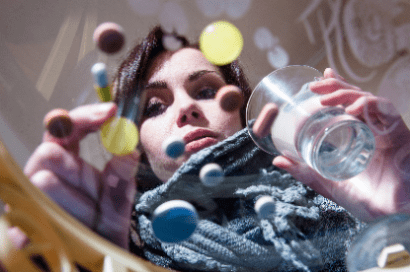 For an individual looking for help with opioid addiction, there are a number of treatment options. The most widely recognized treatment in the past was Methadone maintenance. For over 60 years, clinics have been dispensing methadone to those affected by opioid addiction. Methadone is a longer and more gradually acting opioid that helps to reduce withdrawal symptoms and cravings which drive so many users back to heroin and other opioids like pain medications.

Although methadone is supposed to be a bridge to recovery from addiction, many users lapse back to heroin use with methadone. Accordingly, users often remain on methadone for years, sometimes even indefinitely. Sometimes called “trading one drug for another” the majority of methadone adversaries claim that methadone is just the “legal form of misuse.” Methadone is also a dangerous drug if misused, as illustrated in the diagram below.

In 2002, a different medication was introduced to the market designed to address a new approach for treating those suffering from opioid addiction called Buprenorphine. Suboxone® is a trade name for a drug made up of 4 parts of an opioid called Buprenorphine and one part opioid antagonist, Naloxone. While Buprenorphine has a very strong affinity for its receptors, it only activates it partially.  In theory, this means it will take up all the receptors if a person decides to use it simultaneously with a full activator like heroin, but it won’t have as powerful of an effect and it may induce painful withdrawal.

The addiction of Naloxone, an antagonist which attaches to receptors and prevents them from being activated, is intended to deter people from injecting or misusing Suboxone. When the formulation is crushed and injected, the Naloxone in Suboxone is designed to block many of the receptors, essentially causing a user to suffer a very unpleasant to an even severe withdrawal as well as a waste of money due to blocking the euphoria effects.

Suboxone can be taken in pill form or film form – both are meant to be absorbed under the tongue.

Additionally, under the Drug Treatment Act 2000 specially licensed doctors can prescribe buprenorphine from their offices, instead of clinics. Once a stable dose is achieved and a patient has shown to be compliant to the program, your physician can slowly reduce your office visits from weekly to one visit per month.  “Having the convenience of a monthly prescription of medication, patients don’t have to deal with the inconvenience and stigma of making daily visits to a clinic.

Many users also report feeling more confident, almost like their “old selves” with Suboxone.  Since Suboxone is only a partial agonist, it causes a milder “high” and is not as prone to abuse or overdose.

NOTE : Your treatment plan is at the sole discretion of your physician and will be highly determined by your compliance to the program. Being responsible to attend counseling is part of the program and we highly recommend and require coupling counseling with your medication-assisted treatment (MAT) to heighten the chances of your success.

What are the pros and cons of treatment with Methadone?

What are the pros and cons of treatment with Buprenorphine/Suboxone?

Feel free to email us regarding any scheduling or general questions!