Buprenorphine is a prescription pharmaceutical, which attaches to the same reward centers in the brain as the abused opiate would occupy. By attaching to these sites, called Opioid receptors, buprenorphine completely eliminates withdrawal symptoms.

In 2002, the FDA approved Buprenorphine for the treatment of Opioid addiction for its favorable safety profile and the following benefits: 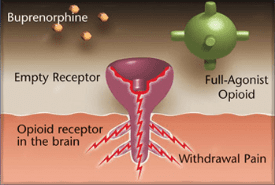 1. Opioid receptor is empty. As someone becomes tolerant to opioids, they become less sensitive and require more opioids to produce the same effect. Whenever there is an insufficient amount of opioid receptors activated, the patient feels discomfort. This happens in withdrawal. 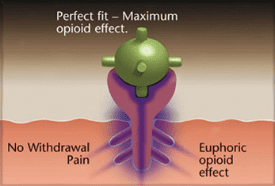 2. Opioid receptor filled with a full-agonist. The strong opioid effect of heroin and painkillers can cause euphoria and stop the withdrawal for a period of time (4-24 hours). The brain begins to crave opioids, sometimes to the point of an uncontrollable compulsion (addiction), and the cycle repeats and escalates. 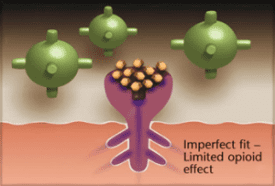 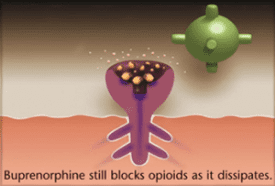 However, it still creates a limited opioid effect (enough to prevent withdrawal) and continues to block other opioids from attaching to the opioid receptors.

Source: The National Alliance of Advocates of Buprenorphine Treatment – www.NAABT.org

Several drugs contain the active ingredient Buprenorphine, including Suboxone, Zubsolv, Bunavail, and others are expected in the future. Suboxone is the one most frequently prescribed by physicians, has the longest track record, and provides the most availability at pharmacies.

While Suboxone (Buprenorphine) is a medically approved and useful option for opioid dependency, it is important that you educate yourself as much as possible about this pharmaceutical before making a treatment decision.

Side effects can include:

How long should treatment last?

Opioid addiction is a result of brain changes that result from chronic opioid use. Each patient’s struggle for recovery is unique, but entails overcoming the effects of these changes. Adapting to new coping mechanisms and reversing these brain changes take time. 18 to 24 months is a reasonable expectation for a treatment timeframe.

We will do our best to accommodate your busy schedule. Request an appointment today!

Accessibility by WAH
Call Us Text Us